“Then the eyes of both of them were opened and they realized that they were naked.” 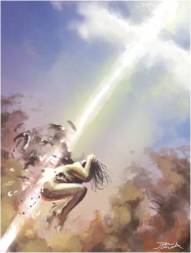 he official investigative report came out today from former FBI director Louis Freeh regarding the details of the Jerry Sandusky case and the response of Penn State University officials to the allegations between 1998 and 2001.

It is a 267 page report demonstrating clearly the enormous and complicated struggle with the issue of childhood sexual abuse.  Jerry Sandusky is in prison and will never be released; that is justice.  However, the fallout will go on for decades.  Consider just a few of the implications:  Joe Paterno’s legacy of 50 years will be forever tarnished.  Penn State University will be besieged by law suits and devastating publicity; public trust is crippled.  The number of boys directly abused by Jerry Sandusky may never be known and each of them is scarred for life.

Multiply the survivors by the members of their families that have suffered with them, it is well into the hundreds. Mr. Sandusky’s family; Mr. McQueary and his family; the Paterno family; the individuals and families of the Penn State Athletic Department and Administration and the list goes on and on. The damage will manifest itself for years and through generations.

And still, the most disturbing part of the report is the intentional efforts to cover, deny, and silence.  Here is an example from the report.  John Seasock, who had a contract to provide counseling services, did an evaluation on the boy abused in the May 1998 incident with Sandusky.

“During the meeting with Seasock the boy described the incident with Sandusky. Given that the boy did not feel forced to engage in any activity and did not voice discomfort to Sandusky, Seasock opined that ‘there seems to be no incident which could be termed as sexual abuse, nor did there appear to be any sequential pattern of logic and behavior which is usually consistent with adults who have difficulty with sexual abuse of children.’ Seasock’s report ruled out that the boy ‘had been placed in a situation where he was being groomed for future sexual victimization.’ Seasock recommended that someone speak with Sandusky about what is acceptable with young children and explained, ‘the intent of the conversation with Mr. Sandusky is not to cast dispersion upon his actions but to help him stay out of such gray area situations in the future.”

Translation:  Mr. Seasock a “licensed” counselor was either covering or clueless.  Never is there a mention of the validity of the boy’s story.  Never is there a sense of concern or compassion for trauma the boy suffered.  The boy reported it to his mother, she reported it to the school and what followed was a series of denials including the recognition of the severity of the behavior; affirmation that the perpetrator just made a poor choice in judgment; and fear of the ramifications for the University and its football program must be protected.

The incident remained out of the public eye for three years when Michael McQueary witnessed Jerry Sandusky raping a boy in a locker room shower.  Once again, the players were informed of the behavior, this time with Joe Paterno the first to hear.  Once again, FEAR gripped everyone involved and those with the authority and power to protect and save the vulnerable worked instead to protect themselves and the institution.

Before casting aspersions on the Penn State community, see this for what it is; another reflection of the power of the enemy of all men’s souls, to destroy the glory of Gods design for human sexuality. The Penn State community demonstrated what all communities do in this situation.  Hide in shame.  It’s right there in Genesis 3:7; “Then the eyes of both of them were opened, and they knew they were naked, and they sewed fig leaves together and made themselves loin coverings”.

The enemy attacks man’s dignity every single day and his most potent weapon is destroying human sexuality, the most personal of all human emotions and experiences.  If it can be exposed in a manner for which it was not designed the immediate reaction is shame and cover.  In the process, the victim is shamed for revealing, the perpetrator shamed for the behavior, the culture shamed for allowing the behavior and all the time nothing is said or done until it reaches a tipping point.  Once the sensationalism dies down, it’s back to the status quo.  This is just something we will not address or discuss.

Where are we people?  It would be so comfortable to believe that Jerry Sandusky is an isolated aberration.  It would be so easy to just dismiss this as an isolated incident that never makes its way into the faith community.  How many more Jerry Sandusky’s will it take to bring us to our knees?  When will we come out from behind the trees and face our Lord, who is asking, “Where are you?”

The glorious gift of human sexuality is the greatest design and gift given man by his creator.  It is time we stood up to the enemy and said enough. People…please embrace the power given to us by our Savior to keep the enemy in its place. Please stand up in our communities and shout the message of hope.  Please consider the pain and suffering we are allowing to millions by our silence.  Please step up.

Founder and Director of Holding on to Hope Ministries. A non-profit work that helps survivors of childhood sexual abuse unveil their past and begin the healing process. Author of the book Shattered; One Man's Journey from Childhood Sexual Abuse
View all posts by Bill Harbeck →
This entry was posted in Uncategorized and tagged current-events, fbi director louis, former fbi director louis, jerry sandusky, penn state athletic department, politics. Bookmark the permalink.