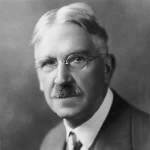 If John Dewey were alive today he would he would pat himself on the back for predicting a Obama victory in the Presidential election.  John Dewey, a legendary education leader at the turn of the 20th Century and one of the “Seven Men Who Rule the World from the Grave”, forecast the coming domination of secularism and its promise of bliss.

Dewey along with numerous intellectual thinkers formulated the concept that a system of public education would advance the American culture better and more efficient.  Dewey’s piece in the education paradigm shift of the early 20th century has been lost in the understanding of the current demise of pubic education and the culture at large.

In the 1920’s Dewey along with his fellow humanists proposed and implemented the ideas of a New religion and recognized the most advantageous arena to promote the ideas was in a public school system free from the constraints of metaphysical influence.

In his book “Education Today” Dewey states,”I believe that it is the business of every one interested in education to insist upon the school as the primary and most effective instrument of social progress and reform.”

What Dewey and the other humanists  posited was that secularism was the New Religion. It would replace present religion and it would establish its cathedrals in the public schools and eventually in Colleges and Universities. Again in “Education Today” Dewey states, “In performing this service, it is the business to do what they can (officials, parents, teachers) to prevent all public educational agencies from being employed in ways which inevitably impede the recognition of the spiritual impact of science and of democracy, and hence of that type of religion which will be the fine flower of the modern spirit’s achievement.”

Roy Woods Sellars writing in 1928 provided  fodder for Dewey’s claims. In his book, “Religion Coming of Age” Sellars quotes E Burdette Backus; “…the signs are clear that humanity has struck its tents and is again on the march toward a new religious faith which I dare to believe will provide us with a religion greater than Christianity, greater than any historic faith of the past…”

Later in the same work Sellars declares, ”Now I am convinced that the humanistic religion into which Christianity will gradually be transformed will correct this mistake.”

In 1930 a former Baptist minister Charles Francis Potter wrote in his work, Humanism a New Religion “Education is that a most powerful ally of Humanism, and every American public school is a school of “Humanism”.  What can the theistic Sunday-schools, meeting for an hour once a week, and teaching only a fraction of the children, do to stem the tide of a five-day program of humanistic teaching?”

Dewey was a piece of the perfect storm of the late 19th and early 20th century.  The education piece of the paradigm shift was crucial for the ideas to take hold and progress to a formidable influence.  Dewey keenly recognized that Christianity must be replaced in order for humanism to gain a foot hold.  In his famous work “A Common Faith” in 1930 Dewey states, “Here are all the elements for a religious faith that shall not be confined to sect, class, or race.  Such a faith has always been implicitly the common faith of mankind.  It remains to make it explicit and militant.”

Dewey spent the rest of his life  seeing that the public education classroom became the training ground for the new religion. Over five generations now, the Religion of Humanism has gained total control of  education  in this country.  Higher Education provides the finishing touches and releases into the culture unknowing robots filled intellectually, emotionally, and spiritually with the belief that man is the highest order and his happiness and the pursuit of that happiness is all that matters and is to be sought at all costs.  All means justify the end of happiness and personal actualization.  Dewey would herald Obama’s re-election as the proof positive that without the classroom at all levels, Humanism would not succeed.

I sense the disappointment and despair at the continuance of the present political leadership.  It is time to acknowledge that over one hundred years of training and indoctrination on a massive scale will not be changed quickly, certainly not in one or two elections.  It took five generations to bring this country to this place.  Is there any hope?

I believe it is all about the local community now.  It is about families that did not stray from Jesus and the Bible.  It is about young parents instilling in their children the tenets and truths of the Holy Scriptures. It is about those families continuing to influence neighborhoods one friend at a time.  Time has destroyed the ability for large-scale influence in this society.  But the flame of truth in each individual heart must never go out.  Capture the joy of living a life of trust and obedience to the call on each of our lives.  The enemy of our souls will never triumph.  Hold on to that hope.