Bill and Jillian on Oprah Nov 5th and 12th 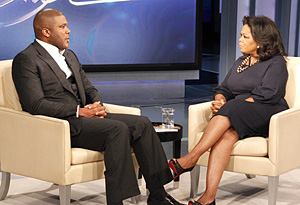 Last week Jillian and I were part of a historic moment in television history. Two hundred men assembled in the Harpo studios in Chicago to proclaim to the world that they were survivors of childhood sexual abuse. In her final season Oprah Winfrey is making a statement that the time for silence is over. Together with Hollywood producer Tyler Perry, Ms. Winfrey dedicates two upcoming shows to exposing the shame and silence male survivors face around the world. Since her program began twenty five years ago Ms. Winfrey a sexual abuse survivor herself, has had the courage and determination to raise awareness on her program for women. This time, she boldly walks with men on the program who have suffered horrendous evil and come out the other side on the road to healing. She is to be commended for going where no other TV program has ever dared to go. I was honored to stand along with the other survivors in the studio and celebrate the joy of freedom in taking back the power I lost as a child. I urge you to mark your calendar for both shows that will air on November 5th and 12th. Click here if you would like to read about our entire experience in Chicago. It is a chapter from my upc

oming book Joree; A Broken Reflection of God’s Glory and is entitled, Joree and Oprah