The Lepers among us.

Yesterday it came to my attention that a young man was released from prison early.  What delightful news for a mother and family that after ten long years her son was coming home.  With open arms and a loving heart you can picture the reunion with joy and tears.  If only.  If only it had happened that way.

That was not the picture.  The young man was dropped off at an extended care residence demanding $260 per week for a place forty miles from his mother’s home.   He had less than one hundred fifty dollars and was informed he has ten days to register as a sex offender.  Failure to register is a Class Four Felony.  Registration cost is $250. He has 72 hours to find a satisfactory place of residence or face violation. His only relative, his mother cannot house him because she resides in Section 8 housing. eHe was told he needed to begin immediately searching for employment. Then the adult authority in his life left him with the words, “good luck son.”

There he stood, a bracelet shackled to his ankle to track his every move. His enslavement continuing despite the system granting him “freedom” to move about in the “outside” world; his crime?  At the age of thirteen he was indicted and sentenced to ten years for child molestation.  Ten years.  The first five spent in juvenile detention.  At age 18 transferred to the state prison facility to spend five years with other individuals labeled the worst of the worst.  Then unexpectedly without notice, he is released with expectations of adapting to the “real” world in ten days or face return to prison.  What do you believe will be his chances of “success?”

This scenario plays itself out countless times across the country day after day.  The people seen as the refuse of society are cast to the side or locked away to protect the rest of us from those deemed unclean.  Regulations and expectations are placed on them that less than 2 in ten can ever keep.  The “system” does nothing to provide a pathway to change or healing.  The culture dictates where they can live, work, and travel and then offers nothing to assist.  The clarion call goes out, “it’s about the protection of our children and society that sex offenders be kept isolated and identified to the world so all others can be safe.”

How will we account for our actions one day when the Savior of the world looks at us and asks, “What did you do for the least of these brothers of mine?”  You don’t understand Bill; we could not dare allow one of these into our community.  Our community is a place where there must be safety for all from these predators.  How dare anyone suggest we lack compassion, or grace.  There is a much greater concern for the whole. Even the authorities suggest that these individuals cannot be rehabilitated, how would anyone expect us to extend a helping hand for fear they offend again?

My wife and I have committed ourselves to caring for those broken by sexual abuse.  Eight years ago I approached the Arizona Department of Corrections with an offer to begin a program of outreach and healing to the sex offender community either inside or outside of prison.  I was told that rehabilitation for sex offenders is not a plausible goal and that incarceration is best practice in order to protect the society.  Any desire for programs is not productive and the costs too prohibitive for desired outcomes. “You can try Mr. Harbeck, but don’t expect support or any financial resources from the state or for that matter any organization.”

I explored starting a program outside the walls and learned that regulations established by the purveyors of sound judgment make it extremely difficult to establish a class, let alone an entire program for recovery.  I learned that without money, all the good intentions in the world will remain just that, good intentions.  I felt the frustration that is only a fraction of what sex offenders experience every moment.

I returned to the teaching profession last fall.  For nearly ten years we have attempted to spread the word that there is an epidemic of sexual abuse in this country.  We have walked with dozens of survivors that need connection on a daily basis.  We have opened our home, offered assistance to countless communities, given and attempted to raise funds to just put a dent in the enormous need.  I returned to the classroom because I need to provide for the basic essentials of life for Jillian and I.  It is still my desire to be available to walk daily with survivors of sexual abuse.  I still hear the calling to find a way to save one or two offenders who are always survivors themselves.

I know there is a reason my Lord has not opened the door in a larger way.  That assurance is difficult to walk through after all the years of struggle. We will continue to be a tiny sliver of light, and a small ray of hope for the one or two that our Lord brings our way.  Pray with us won’t you?  Sexual abuse survival and sex offender recovery are the darkest issues of any we face in battle with the enemy. We cannot surrender our fellow souls to evil’s grasp.

“As for the leper who has the infection, his clothes shall be torn, and the hair of his head shall be uncovered, and he shall cover his mustache and cry, Unclean! Unclean!  Leviticus 13:45

“And it came about while He was on the way to Jerusalem, that He was passing between Samaria and Galilee.  And as he entered a certain village, ten leprous men who stood at a distance met Him; and they were saying, “Jesus, Master, have mercy on us!”

And when He saw them, He said to them, “Go and show yourselves to the priests.” And it came about that as they were going, they were cleansed.  Now one of them when he saw that he had been healed, turned back, glorifying God with a loud voice, and he fell on his face at His feet, giving thanks to Him.  And he was a Samaritan. Luke 17:11-16

From the article: “Here’s What Life Is Like After You Get Out Of Prison For A Sex Offense”  Business Insider October 13, 2013

Most U.S. states require released sex offenders to register in online databases and adhere to guidelines about where and how they can live their lives.  Here are just s few things sex offenders have to do post-release: 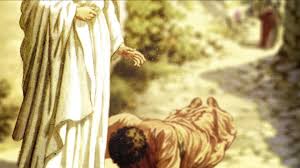